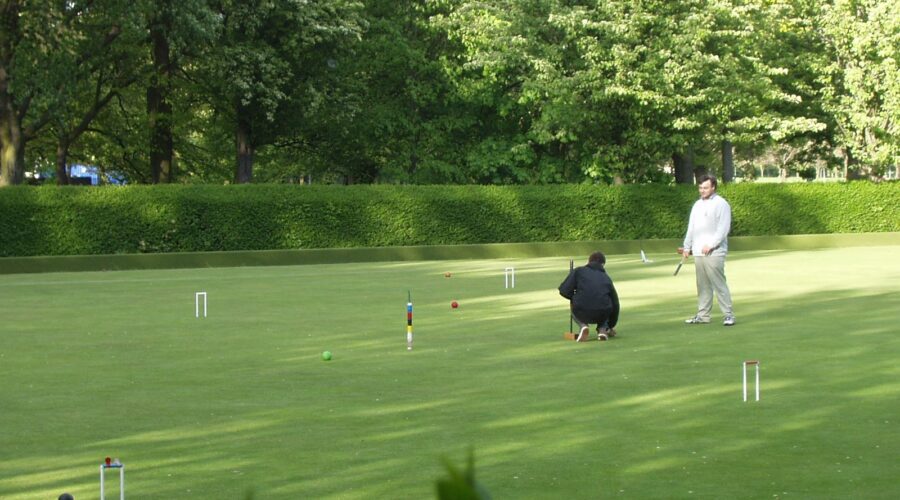 How to play croquet

There are many benefits to keeping a well-manicured lawn, from that feeling of satisfaction you get looking out at those uniform stripes in the back garden, to the joys of seeing your children or grandchildren running through the sprinklers on a hot summer day.

But that’s not where the joys of a nice lawn stop. One of the lesser considered advantages is that a billiard table lawn opens up your backyard to a whole new world of lawn games.

From bowls and lawn darts to Mölkky, there’s a wealth of games you can play in the back garden. That’s why we’re starting a new series of blogs entitled ‘how to play’ where we give the rundown of our favourite lawn sports; how to play them and what you need lawn-wise in order to be able to enjoy the game most.

For our first post we’re starting with perhaps the most famous lawn game of them all, croquet!

There are many different croquet games from the simple to the complex, most of which can be played with a standard croquet set. However, in this blog, we’re going to cover Association Croquet which is one of the more advanced iterations of the game that is played internationally.

What’s great about this version of the game is that it requires two teams of two to work together to win. Combining judgement, teamwork, and tactical thinking — it’s a game for all ages, from grandkids to grandparents, as there is no reliance on strength or agility to be a good player.

Four players divide into two teams: team one taking the black and blue balls, while the other team takes the red and yellow balls.

The winning team is the one to successfully get both of their balls through all six of the croquet hoops both ways and then hit the central peg (going through 12 hoops in total). A player starts a turn by hitting either of their team’s balls with the mallet, they must then only strike that ball for the remainder of their turn.

A standard croquet lawn measures 35 x 28 yards, however, you can play the game in a much smaller space, as long as you maintain the same ratio of distance between the hoops. The first hoop is placed on the southwest side of the pitch, with the second hoop on the northwest side, the third on the northeast and the fourth in the southeast. The remaining two hoops sit seven yards north and seven yards south of the peg which is located directly in the centre of the pitch. Note, the southern centre hoop generally has a red stripe on it and is known as the Rover, this is because it is the last hoop you need to go through before hitting the peg. 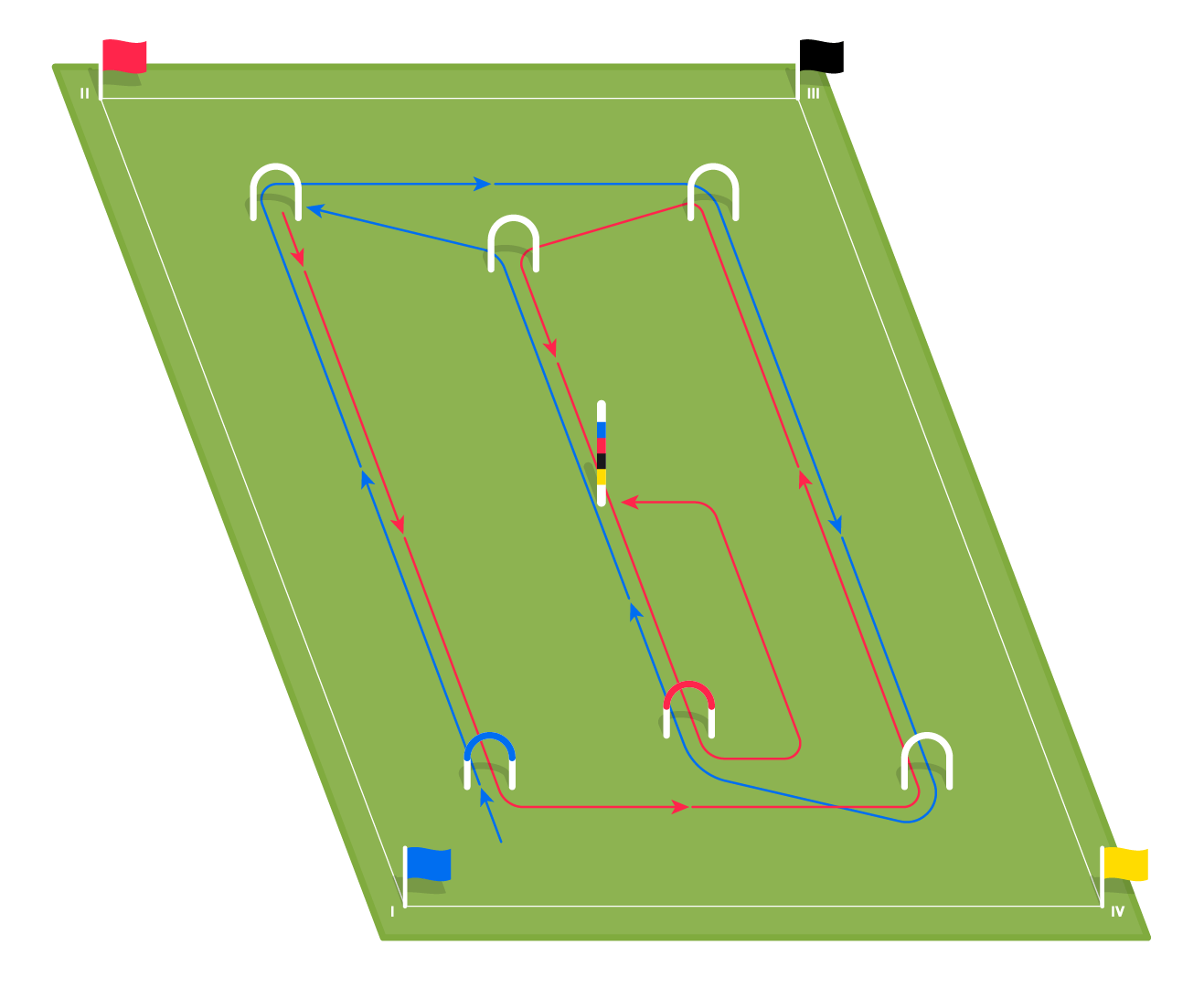 Players begin with the hoop in the southwest corner, this hoop will often have a blue stripe on to indicate it.

Once this route has been completed players then need to bring their balls back in the opposite direction, passing the ball through each hoop from the other side:

Once a player’s ball has passed through the Rover the second time, they can complete that ball’s circuit by hitting it, so it knocks the central peg. The first team to do this with both of their balls is the winner.

Roquet and additional hits per turn

Successfully hitting your ball the correct way through a hoop grants the player another strike on that turn. You can also get two additional goes in a turn for hitting one of the other balls, this is known as roquet — the first extra stroke is the croquet stroke and is played by picking up your ball and placing it in contact with the ball you hit. You then get one ‘roquet’ strike where your ball will also knock aside the other ball, after which you get a continuation shot, allowing you to aim for a hoop or another ball. You can only roquet each ball once unless you successfully score a hoop which allows you to start the process again.

While croquet can feasibly be played on any reasonably flat surface, officially croquet should be played on a well-manicured, completely level lawn with grass mown to a length of 5mm. Indeed, Oxford Croquet states “a long-term regime of top dressing, hollow tining, scarification, mowing, nutrition, weed and pest control and overseeding will repay all the hard work with better quality finer turf” http://www.oxfordcroquet.com/care/calawns.asp This is to reduce resistance on the balls, allowing players to play both more accurately and tactically.

Looking to create a croquet lawn?

Do you long to play croquet in the back garden but are sick of weeds, dry patches and other obstructions reducing your enjoyment. Why not contact Greensleeves to find out if one of our lawn care services could be the solution?